The national programme’s main objective is the strengthening of democratic statehood, political participation and social justice as features of the Zambian society. This objective is subdivided into two project aims, namely the further development of democratic standards by all relevant socio-political actors and the implementation of relevant reforms aiming at just economic and social policies in Zambia.

1.      Progressive proposals for shaping social justice and value-based governance are given more public visibility, thereby influencing the social debate and provoking statements and actions from the political elite.

2.      Civil society organisations make the right of access to information and freedom of opinion subject to public discussion through lobbying, publish violations and demand justifications from political elites.

3.      At least three graduates per year of the Young Leaders commit to volunteer work.

4.      Feminist positions, such as the enforcement of quotas, should find their way into the political debate.

The phase of social opening, felt after the PF, was taken over the government and associated by civil society actors with hopes for concrete improvements in political participation. Opportunities for participation were created, especially in the reforms of the constitution and social and economic policy that were underway. This window, however, began to close again in conjunction with the political turbulence within the ruling party. Hardliners have largely asserted themselves and reoriented the political system toward the executive branch around the presidential administration. It can be assumed that the supreme courts are not independent and that the parliament does not exercise sufficient control over the use of resources. Problem-solving and value-oriented leadership is being pushed back by power- and patronage-oriented decisions of the political elite. The trend towards suppressing alternative opinions of the opposition, civil society and the free media through autocratic tendencies is growing noticeably. The democratic scope for pluralistic participation is shrinking noticeably.

In order to defend and expand the democratic space in Zambia, all central social groups must participate in a political dialogue. Deficits in the areas of political participation, value-oriented and transparent governance, and the rule of law must be discussed critically and constructively in a climate of tolerance, and alternatives decided upon. The continuing pronounced discrimination of women in social decision-making processes requires special consideration.

In this working line, the FES will regularly bring together progressive social forces in order to use the instruments at its disposal to offer spaces for shaping the democratic transformation of the country. The regional and international networks of the FES will provide impetus for national debates. The network will offer women the opportunity to network separately and act together. Gender justice and feminist perspectives will be an active part of this process and will have their own pillar in the Youth Leadership Training Programme. Youth Leaders will apply the competences acquired to professionalise and value-orientate their organisations and progressively promote the values of social democracy.

The Foundation is established in Zambia's social fabric as a place for exchange, discussion of politically and socially relevant issues and the development of alternative policy offerings. It has access to important public figures in parliament, ministries, political parties, trade unions and civil society and is recognised as a value-oriented partner. This enables it to support progressively oriented decision-makers and reforms. Multipliers who combine social and political participation with democratic convictions must be strengthened so that formal democracy and substantial participation can grow hand in hand. Civil society groups, especially women and the younger generation must be offered opportunities to participate in social transformation.

Project objective 1.2:Trade unions and civil society actors have influenced political decisions with proposals for a fair transformation of the economic and social order.

2.      The trade union confederation and sector unions cooperate with informal sector organisations to strengthen the membership base and introduce right-based social security for informal workers.

3.      Global framework agreements are enforced by trade unions with the support of regional and international networks in at least two multinational companies in Zambia.

4.      The trade union confederation adopts an action plan with a revised gender policy to achieve gender equality in the organs and a better visibility of feminist positions in the programmes.

The liberalization and privatization of the Zambian economy, together with the increasing investment by international companies in trade and services, and the sharp rise in the presence of Chinese companies have brought Zambia growth rates of five percent per year. However, this has not been accompanied by a significant reduction in poverty and unemployment. More than 80 percent of people of active working age secure their superiority in the informal economy. Likewise, the unequal distribution of income has consolidated and increased wealth in the hands of a small elite. Trade union rights have been curtailed and the membership base weakened by job cuts.

The transformation of the economic and social order in favour of inclusive growth, sustainable employment promotion, and the expansion of social security systems, including informal workers, are urgent challenges for Zambian society. The expansion of precarious working conditions particularly affects women from socially disadvantaged groups. A political anchoring of the Decent Work Agenda helps to improve the security of women. The trade union movement must face up to its internal challenges to strengthen its membership base so that it can assert its interests externally in social transformation. Their ability to speak and act on key political issues and to influence and shape the legal framework will be strengthened.

In this working line, the FES will support trade unions and civil society actors so that they can represent their interests for a just transformation of the economic and social order. With thematic alliances on labour and social legislation, decent work and transparent governance, they will position themselves for social justice with a high profile. Reforms in the field of labour market and social policy will be accompanied and dialogue between the central socio-political actors (government, trade unions, employers and civil society) will be promoted in order to develop concepts and ideas.

Fourthly, the collaboration with young leaders should be intensified. Therefore, the Youth Leadership Development Programme (YLDP) is designed. Please have a look at the YLDP in order to get more information.

Rights based social protection systems are crucial to safeguarding the vulnerable and the poor in shock and crisis situations. In many countries in… 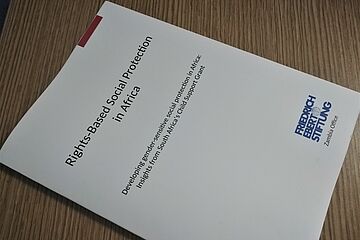 In this technical brief, South Africa’ Child Support Grant (CSG) programme is used as a case study to illustrate the argument. Despite adopting a… 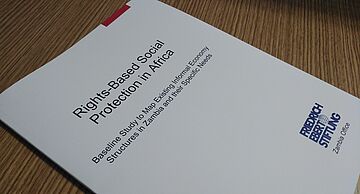 The informal economy plays a critical role in the lives of millions of individuals in both urban and rural settings across the globe. It provides…

The #FESAfricaCoronaBrief and blog series titled: “Disrupted: How COVID-19 is affecting societies across Africa” will investigate how African…

The Friedrich-Ebert-Stiftung (FES) is a non-profit German foundation funded by the Government of the Federal Republic of Germany, and headquartered in Bonn and Berlin. It was founded in 1925 and is named after Germany's first democratically elected President, Friedrich Ebert. FES is committed to the advancement of both socio-political and economic development in the spirit of social democracy, through civic education, research, and international cooperation. Friedrich-Ebert-Stiftung is the oldest political foundation in Germany.